Lee at the 2003 Billboard Music Awards 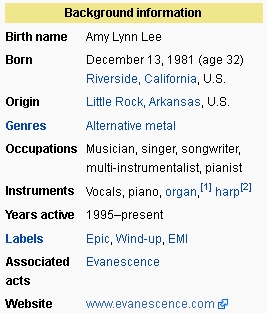 Amy Lynn Hartzler (née Lee; born December 13, 1981), known professionally as Amy Lee, is an American singer-songwriter and classically trained pianist. She is co-founder and lead vocalist of the rock band Evanescence. She cites influences ranging from classical musicians such as Mozart to modern artists Björk, Tori Amos, Danny Elfman and Plumb. Along with her contributions to Evanescence, Lee has also participated on numerous other musical projects including Walt Disney Records’ Nightmare Revisited and Muppets•The Green Album. Lee has performed collaborations with artists such as Korn, Seether, and David Hodges. Lee is also the American chairperson for the international epilepsy awareness foundation, Out of the Shadows. Revolver Magazine named Lee the #1 Hottest Chick in Hard Rock for their 2011 annual issue and she appeared on the front cover. In February 2012, VH1 placed Amy Lee at #49 in the Top 100 Greatest Women in Music. In April 2012, Lee won the Best Vocalist honor at the Revolver Golden Gods Awards. In 2013, Amy Lee was named the 2012 Rock Goddess of the Year in the Loudwire Music Awards and the Hottest Woman in Music 2013 in the NME Awards.

Amy Lee was born in Riverside, California to parents John Lee, a disc jockey and TV personality, and Sara Cargill. She has a brother named Robby and two sisters, Carrie and Lori. There is a rumor that Lee had a younger sister who died in 1987 at the age of three from an unidentified illness. The song “Hello” from Fallen has been reported to have been written for her late sister, as well as the song “Like You” from The Open Door. Lee took classical piano lessons for nine years. Her family moved to many places, including West Palm Beach, Florida and Rockford, Illinois, and eventually settled in Little Rock, Arkansas, where Evanescence started. Lee graduated from Pulaski Academy, a private school in Little Rock, in 2000. She briefly attended Middle Tennessee State University in Murfreesboro to study music theory and composition in 2000 but dropped out to focus on Evanescence.

In an interview on AOL Music, Lee said that the first songs she remembered writing were called “Eternity of the Remorse” and “A Single Tear”. The first was written when she was eleven years old and wanted to become a classical composer, and the second was for an assignment when she was in the eighth grade.

Lee co-founded the rock band Evanescence with guitarist Ben Moody. The two met at a youth camp after Moody heard Lee playing Meat Loaf’s “I’d Do Anything for Love (But I Won’t Do That)” on the piano. Within a month, the pair were playing acoustic sets at Arkansas book stores and coffee houses, and they eventually recorded two EPs, Evanescence EP (1998) and Sound Asleep EP (1999), selling them at various local venues. In 2000, Evanescence recorded the longer EP Origin. This demo contains three songs from the debut album Fallen and was written by Lee and Moody: “Whisper”, “Imaginary” and “My Immortal”. Whereas “Whisper” and “Imaginary” were altered before being included on Fallen, “My Immortal” is virtually unchanged, apart from additional string arrangements. A later band version of “My Immortal” was made available for download for those who had bought an official version of Fallen through their web site, but required that a CD checker program also be downloaded for verification before it would play. The band version was included on later copies of Fallen, notably the Brazilian, Bolivian, and Argentine editions.

On October 22, 2003, Moody left the band citing “creative differences”. In an interview several months later, Amy said: “…we’d gotten to a point that if something didn’t change, we wouldn’t have been able to make a second record”. She also said “We’re finally a real band, not just Ben and I and a few others thrown together”. Ex-Cold guitarist Terry Balsamo replaced Moody in the band, both on guitar and as Lee’s writing partner.

Lee has a recognizable fashion style, marked by her occasional use of gothic make-up and taste for Victorian-styled clothing. She also designs many of her own clothes, including those worn in the music video for “Going Under”, and the dress worn for the cover of The Open Door and the dress she wore to the Nobel Peace Prize concert in 2011. After she designed the dress she wore at the 2004 Grammy Awards, she chose Japanese designer H. Naoto to make it for her. She at one point had a piercing on her left eyebrow, which is visible on the cover of Fallen. In an interview with VEVO stylized, Lee showcased and explained her fashion style, commenting that she’d rather make her own clothes because it’s hard to find what she exactly wants elsewhere. In an interview with AOL, Lee stated that her daily style is very different from when she performs; pointing out that she was wearing “something flowery” during the interview. She explained that her on-stage wardrobe was meant to preserve the atmosphere of the songs and complete the image. In another interview, she stated that when the band first started performing, she would wear corsets to avoid diluting the band’s public image, but has gradually become more comfortable with her own style. Her current on-stage style is often characterized by boots, a simple black tank top, a long skirt and various ornaments and accessories.

She has stated on a number of occasions that she would never flash her breasts or engage in other publicity stunts that would draw attention to herself. Further, in the music video for “Everybody’s Fool”, she aimed to mock such artists by suggesting that celebrities who use sex to appeal to an audience are, in fact, merely peddling “lies” (the unifying theme of the music video). Many fans praise Lee for her refusal to emulate other celebrities by using sex appeal in her music.

In 2006, Blender listed Lee as one of the hottest women in rock alongside such singers as Joan Jett, Courtney Love and Liz Phair. In 2013, Lee ranked first in NME.com’s “Hottest Women in Music” award.

During an October 2008 interview for Spin.com, Lee noted that she was writing new songs, possibly for a solo album project. Citing influences in folk and Celtic music, she says her current writings feel like she is going back to her “really old” roots. She gave no potential release date, but said of her reason for this new direction, “I need to show that I’m more than a one trick pony.”

Lee stated during an October 2008 interview with The Gauntlet that she did not know whether or not she would begin a solo career, saying that she was “at a point where I don’t know what is next.” She noted that Evanescence was still together as a band but that she found touring to be monotonous. She reiterated that she was continuing to write songs, though she did not yet know what purpose they would serve.

In a Spin interview in March 2010, Lee stated that she was “in a very different creative space then” regarding her previous work on new material, and that while she wrote some songs that were good, nothing from those efforts would be included in the band’s album Evanescence, which was released on October 11, 2011.

In 2000, Lee sang on two of former Evanescence keyboardist David Hodges’ songs: “Breathe” (The Summit Church: Summit Worship) and the unreleased “Fall Into You”. She performed backup vocals for “Missing You”, a song on Big Dismal’s 2003 debut album Believe, and sang backup vocals on two songs with ‘supergroup’ The Damning Well, though her vocals were taken off the final release due to record label issues. Lee later performed a duet with her then-boyfriend Shaun Morgan on the track “Broken” for Seether’s 2004 album Disclaimer II. The song was also featured as part of the soundtrack for the 2004 film The Punisher.

In 2004, Lee claimed to be working on music for The Chronicles of Narnia: The Lion, the Witch and the Wardrobe, but that the music was rejected by the studio for being “too dark.” However, the producers of Narnia stated that Lee was never asked to compose any music for the film, whose score was written by Harry Gregson-Williams, and that “No Evanescence music was planned for the soundtrack.” While there was some speculation that one of the supposed songs had been cut and used in several tracks of The Open Door, Lee stated this was not true except for part of it being used to segue into the last track of the album, “Good Enough”.

Lee became the American chairperson for Out of the Shadows in 2006. This organization is an international foundation with the goal of providing education about epilepsy. Lee’s younger brother, Robby, was previously diagnosed with this condition. The singer also made a brief guest appearance in the music video for Johnny Cash’s “God’s Gonna Cut You Down” in late 2006. As each celebrity featured in the shoot was allowed to choose what they would be doing for the video, Lee chose to appear laying flowers on a grave. Her scene was recorded at Trinity Church in Manhattan, during which she wore a black velvet coat that previously belonged to Tim Burton.

In February 2007, MTV released MTV Unplugged: Korn to television and radio, in which Lee is featured during the song “Freak on a Leash”. The song was also released as the first single from the album. In November 2007, VH1 produced a mockumentary in the style of Behind the Music, titled Rock Band Cometh: The Rock Band Band Story, to promote the video game Rock Band. Lee was one of the celebrity cameos featured on the show.

In June 2008, the National Music Publishers Association presented Lee with their 2008 Songwriter Icon Award, which “recognizes outstanding songwriters for their personal achievement.”

For Walt Disney Records’ September 2008 release of Nightmare Revisited, Lee sang a remake of “Sally’s Song”. The album contains new material and covers of songs from the original Nightmare Before Christmas soundtrack. Lee performed live renditions of “Sally’s Song” during the October 17 Nightmare Before Christmas re-release premiere in Hollywood, and for an October 13 appearance on The Tonight Show with Jay Leno. In 2011, Lee covered “Halfway Down the Stairs” for Muppets: The Green Album, and in 2012 covered “I’m So Lonesome I Could Cry” for the tribute album We Walk The Line: A Celebration of the Music of Johnny Cash.

Lee was in a relationship with Seether singer Shaun Morgan from 2003 to 2005. Lee wrote a song, “Call Me When You’re Sober”, about him; it was released as the first single from The Open Door.

Lee revealed during the live broadcast of MuchMusic’s January 9, 2007, episode of Live at Much that she had become engaged the prior evening. She later confirmed on EvThreads.com that Josh Hartzler, a therapist and long-time friend, proposed to her. She noted in an interview that the songs “Good Enough” and “Bring Me to Life” were inspired by him. The couple married on May 6, 2007, and honeymooned near The Bahamas. She posted on EvThreads that she is “now officially Mrs. Amy Hartzler.” Lee announced to social media on January 18, 2014, that she was pregnant.

On January 3, 2014, TMZ reported that Lee had sued Evanescence’s label, Wind-up Records, for $1.5 million in unpaid royalties. In March 2014, via her Twitter account, Lee announced that she and Evanescence had been released from their record label and were independent artists.

Collaborations and other songs

Appearances by Lee as a composer:

Follow We can live without religion and meditation, but we cannot survive without human affection. – His Holiness Dalai Lama on WordPress.com