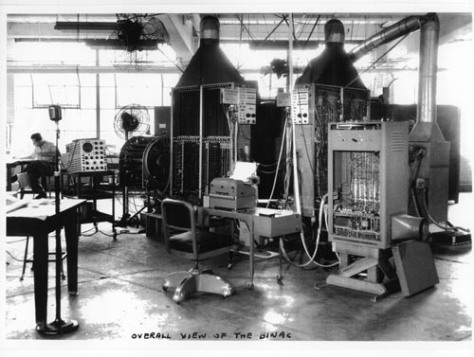 This article is about the early electronic computer. For the town in Kosovo, see Binac.
BINAC (Binary Automatic Computer) was an early electronic computer designed for Northrop Aircraft Company by the Eckert–Mauchly Computer Corporation (EMCC) in 1949. Eckert and Mauchly, though they had started the design of EDVAC at the University of Pennsylvania, chose to leave and start EMCC, the first computer company. BINAC was their first product, the first stored-program computer in the United States; the BINAC is also sometimes wrongly claimed to be the world’s first commercial digital computer  even though it was very limited in scope, never fully functional and always economically unviable.

The BINAC was an advanced bit-serial binary computer with two independent CPUs, each with its own 512-word acoustic mercury delay line memory. The CPUs continuously compared results to check for errors caused by hardware failures. It used approximately 700 vacuum tubes. The 512-word acoustic mercury delay line memories were divided into 16 channels each holding 32 words of 31 bits, with an additional 11-bit space between words to allow for circuit delays in switching. The clock rate was 4.25 MHz (1 MHz according to one source) which yielded a word time of about 10 microseconds. The addition time was 800 microseconds and the multiplication time was 1200 microseconds. New programs or data had to be entered manually in octal using an eight-key keypad. BINAC was significant for being able to perform high-speed arithmetic on binary numbers, with no provisions to store characters or decimal digits.

The BINAC ran a test program (consisting of 23 instructions) in March 1949, although it was not fully functional at the time. Here are early test programs that BINAC ran:

Northrop accepted delivery of BINAC in September 1949. Northrop employees said that BINAC never worked properly after it was delivered, although it had worked at the Eckert-Mauchly workshop. It was able to run some small problems but did not work well enough to be used as a production machine. Northrop attributed the failures to it not being properly packed for shipping when Northrop picked it up; EMCC said that the problems were due to errors in re-assembly of the machine after shipping. (Northrop, citing security considerations, refused to allow EMCC technicians near the machine after shipping, instead hiring a newly graduated engineering student to re-assemble it. EMCC said that the fact that it worked at all after this was testimony to the engineering quality of the machine.)

Previous computers were the darlings of university departments of engineering. The users knew the machines well. The BINAC was going to go to an end user, and so a usermanual was needed. Automobile “users” were quite accustomed in those days to doing significant servicing of their vehicles, and “user manuals” existed to help them. The BINAC manual writers took inspiration from those manuals when writing the user manual for the BINAC.

The Binary Automatic Computer (BINAC) was one of the first electronic computers. Developed in 1949 by Eckert-Mauchly Computer Corporation for Northrop Aircraft Company, it has the distinction of being the first commercial digital computer in the world as well as the first stored-program computer in the United States.

The Binary Automatic Computer (BINAC) was the only product from the Eckert-Mauchly Computer Corporation, as it later became a division of Remington Rand Corp. The computer consisted of two independent central processing units, each having its own 512-word acoustic mercury delay line memory, which was further divided into 16 channels. The channels in turn could hold 32 words of 31 bits. It also made use of approximately 700 vacuum tubes. The associated clock rate was around 4.25 MHz. New data or applications could only be entered into the computer manually, and only in octal with the help of an eight-key keypad. In other words, the input/output for the computer was entirely octal and instructions provided to the computer were absolute machine language. Apart from reset commands and flip-flop commands, the machine literally had no input/output instructions. 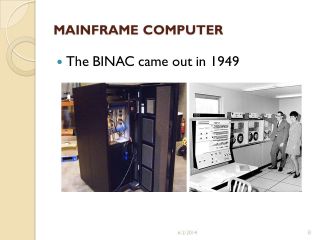 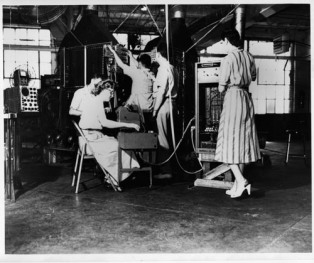 Follow We can live without religion and meditation, but we cannot survive without human affection. – His Holiness Dalai Lama on WordPress.com