With Chinese New Year coming up, and this year being the year of the Rooster, it is worth trying to understand the Chinese zodiac, a system of divination that differs from Western astrology.

The main similarities between the two systems is that both systems are based on date and time of birth, with 12 symbols or signs used to communicate across meaning. We’ve listed some of the main differences, to make things a little easier to understand.

In both systems, there are the same number of signs: 12. Two are superficially similar: Ox/Bull and Goat/Ram. 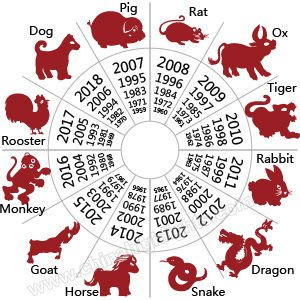 Origins of the Signs

In Chinese astrology, the 12 signs are derived from a myth that when God was developing a calendar, all creatures on Earth were summoned to participate in a race. The first 12 to cross the line were awarded signs in the Chinese zodiac.

This differs from Western astrology where the 12 signs are based on constellations’ positions relative to the earth. The constellations were named according to Greek mythology. 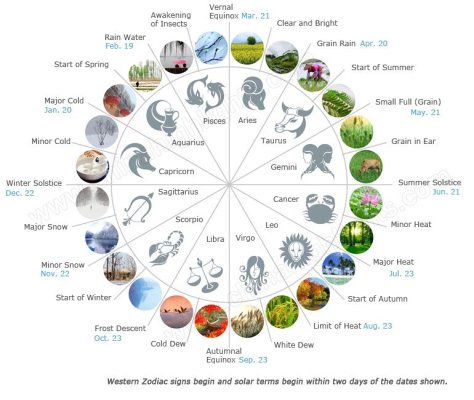 The Chinese zodiac and the Western zodiac have a half month (or one solar term) overlap.

The Chinese zodiac animals were assigned months on the traditional Chinese solar calendar. Each animal sign corresponds with two of the 24 solar terms, for a period similar to a Western zodiac month.

This means that the Western astrological signs and Chinese zodiac months have a half-month overlap, as can be seen in the diagram right.

The Chinese cycle starts with the month of the Rat around December 7 (including solar terms ‘Major Snow’ and ‘Winter Solstice’, i.e. half of Sagittarius and half of Capricorn).

More Than Just Your Birth Year or Month

Within the simplified Western astrological framework, signs are divided per month, while the Chinese signs are divided on a year-by-year basis when it comes to popular astrology. This means that in Chinese beliefs, people who were born in the same year have similar traits, as opposed to the Western belief that those born in the same month-long time frame have similar traits.

However, of course, there is more to it. In Western astrology, apart from the constellations, the planets, for example, symbolize basic motivations in the human psyche. Beside the yearly zodiac, Chinese astrology has three other pillars that create your fate, making four pillars in total: birth year, birth month, birth day, and birth hour. 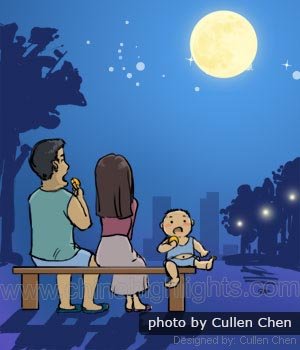 Appreciation of the moon runs deep in Chinese culture.

In the popularly-used Chinese astrology system (the lunar calendar), each month begins with a new moon and lasts for 29 or 30 days. The Chinese New Year date and length of a lunar year change by up to a month relative to a solar calendar.

However, “professional” or conventional Chinese astrology mainly uses the traditional solar calendar when it comes to making predictions and laying out horoscopes. In this method, a year begins on February 4th (within a day).

The Western astrological calendar is based on the Earth’s orbit around the sun (and resulting celestial alignment), which gives every zodiac month a set date (within a day), lasting between 29 and 31 days. This is why Western zodiac star signs are also known as sun signs.

Lunar Phases in China and the West

The Western system, comparatively, considers two moon nodes; the North or Ascending Node, and the South or Descending Node. While still playing a role in sensitive areas, in Western astrology the planets are seen as more important factors.

The Chinese astrology system identifies five elements: fire, earth, metal, water, and wood. Each element is linked to motivating forces in your life. 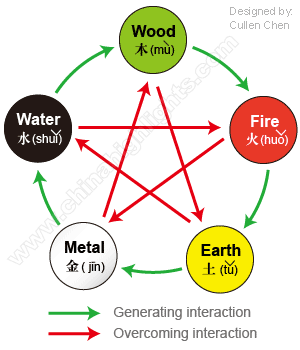 Because the animals are on 12-year cycles and there are five elements, the entire Chinese zodiac-element cycle lasts 60 years. In this system, each sign has a fire, earth, metal, water, and wood variety depending on your birth year. 2017 is a Fire Rooster year.

In the Western system, only four elements are identified: fire, earth, air, and water, and each element is associated with three signs with psychological features. Each sign has one element associated with it.

A feature of the Chinese zodiac that is incomparable to anything in the West is that it is bad luck when your year comes around (every 12 years you “offend the god of age”). Your horoscope is no more unlucky (or lucky) than usual in your Western zodiac month. 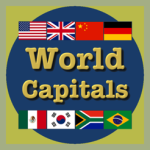 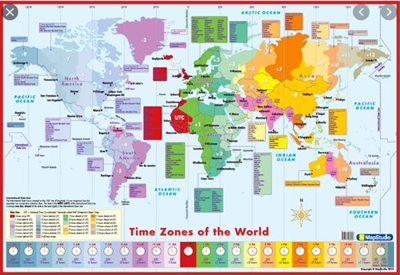 Follow Nothing is permanent. Don't stress yourself too much because no matter how bad the situation is … it will change. [Jay Shetty] on WordPress.com